Posted by Existential drift at 9:30 pm No comments: 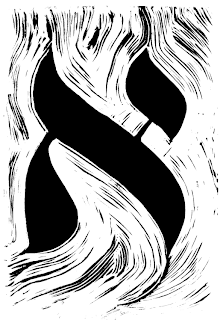 In Jewish Mystical Teaching, the 22 letters of the Hebrew Alphabet are the energetic building blocks of creation. Like the periodic table of elements, God formed all things in the universe through combinations of Hebrew letters (just as atoms of oxygen and hydrogen combine to form a molecule of water). Hebrew letters each have a meaning and a numerical value. Aleph is the first letter of the Hebrew Alphabet. It symbolizes that "God is One" and that He is the Master. It is a silent letter and is not spoken just as the name of the Lord cannot be spoken. Aleph stands for Adam (the first man), for Abraham (who recognized there is only One God) and for Abba (hebrew for "father"). The poet Jorge Luis Borges wrote that Aleph is a point in space that contains all other points. Anyone who gazes into Aleph can see everything in the universe from every angle simultaneously. (4" x 6", black ink print)

Posted by Existential drift at 9:15 pm No comments:

“Proun leads the artist from contemplation to reality. Whereas a completed painting has only its own perfection, each Proun represents only one link in the chain, a short stop on the way to perfection. Proun transforms modes of artistic production. Leaves behind the individualist artist who works locked in his own cabinet. Proun, however, introduces into the creative process, a plurality of producers (…)The author’s personality disappears in the artwork , and we see the birth of a new style, not individual artists, but anonymous perpetrators, which together will construct the building of time”

– El Lissitzky
Posted by Existential drift at 2:48 pm No comments:

Art and Geometry. Jeffrey Smart is an Australian artist who lived in Italy most of his career. He died in Tuscany, June 2013. What is interesting about his work is what is hidden behind the image. Behind the work is a concern for geometrical relationships as a foundation for composition. This is very interesting and has led me on a research course to investigate philosophically how I could use this knowledge in making work with a timeless foundation. I've always known about the golden section, as a device to organize the picture plane, but only at a mathematical level. The golden section is also commonly called the 'rule of thirds'. As I have understood it, the golden section is the basis for drawing up relational lines, that by default, produces a harmonious, and pleasing to the eye, arrangement of shapes.
Posted by Existential drift at 3:21 pm No comments:

A compelling and interactive site that investigates the philosophy and world of Ludwig Wittgenstein and more.
http://www.88constellations.net/88.html
Posted by Existential drift at 9:05 pm No comments:

Still to Movement in the History of Photography. 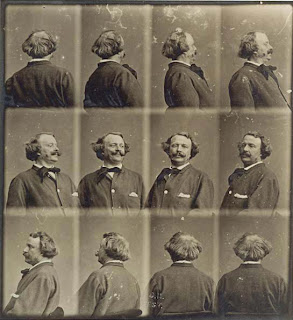 The French nation and an Englishman are the source of all cinematography. Revolving Self-Portrait by Felix Nadar, 1865, whose real name was Gaspard-Félix Tournachon (1820-1910) was the first to combine still images to moving images. The brothers Auguste Marie Louis Nicolas and Louis Jean Lumière held their first private screening of projected motion pictures in 1895. Étienne-Jules Marey (1830–1904) was also influential pioneer of the history of cinema. He adopted and further developed animated photography into a separate field of chronophotography in the 1880s. Eadweard James Muybridge (1830-1904) who was born in England and moved to America as a young man is known for his pioneering work on animal locomotion in 1877 and 1878, which used multiple cameras to capture motion in stop-action photographs, and his zoopraxiscope, a device for projecting motion pictures. 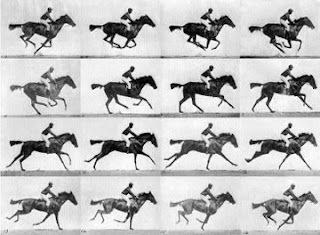 Posted by Existential drift at 2:18 pm No comments:

Its often struck me that what we view in nature can rendered illusory. The the term 'Pareidolia', from the Greek; para. meaning something faulty and wrong, and the noun eidōlon, meaning image, form or shape, gives a historical definition to visual literacy .
I was at a symposium on the Namatjira hertage at Hermansberg/ Ntaria. One of the speakers talked of seeing things in the landscape like faces in profile, animals, etc and also in the paintings of indigenous watercolour painting. He touched on pareidolia to explain if this was the case for indigenous painters. Did they see ancestors and dreaming figures in the landscape? I hadn't known of this term to describe frequent visual phenomena. Of course viewing clouds has always been subject to bouts of pareidolia.

From Wiktionary.
"The Face on Mars” was one of the most striking and remarkable images taken during the Viking missions to the red planet. Unmistakably resembling a human face, the image caused many to hypothesize that it was the work of an extraterrestrial civilization. Later images revealed that it was a mundane feature rendered face-like by the angle of the Sun.


From http://www.livescience.com/25448-pareidolia.html
Pareidolia
Pareidolia is a type of apophenia, which is a more generalized term for seeing patterns in random data. Some common examples are seeing a likeness of Jesus in the clouds or an image of a man on the surface of the moon.
Famous examples of pareidolia
A prime example of pareidolia and its connection to religious images is the Shroud of Turin, a cloth bearing the image of a man — which some believe to be Jesus — who appears to have suffered trauma consistent with crucifixion. The negative image was first observed in 1898, on the reverse photographic plate of amateur photographer Secondo Pia, who was allowed to photograph it while it was being exhibited in the Turin Cathedral. Some visitors to St. Mary's in Rathkaele, Ireland, say a tree stump outside of the church bears a silhouette of the Virgin Mary. Damage to the Pedra da Gávea, an enormous rock outside Rio de Janeiro, Brazil, created an impression that many interpret as a human face.

Posted by Existential drift at 7:05 pm No comments: